AKR implements a fuel-saving program to show concern for environmental sustainability and support for the Republic of Indonesia’s Presidential Regulation No. 61 of 2011 concerning the National Action Plan for Reducing Greenhouse Gas Emissions “RAN-GRK”. This regulation has become the basis for various Ministries, state institutions, and Regional governments to carry out activities that will have both direct and indirect impacts on reducing greenhouse gas (GHG) emissions.

The method used in the calculation of emissions is by multiplying the amount of fuel used and electricity by the Emission Factor (FE) so as to produce an emission value equivalent to CO2. The emission factors used are emission factors that apply internationally, including IPCC Guidelines for National Greenhouse Gas Inventories (2006), Biograce, JEC database, and Ecoinvent. We have not yet calculated emissions from methane (CH4), nitrous oxide, and chlorofluorocarbons (CFCs).

AKR has taken the initiative to reduce the resulting emissions through the management of various emission reduction actions such as the use of generator sets that are more effective and efficient so as to reduce the use of fuel and the resulting exhaust gases. In addition, through the use of LED lights, the installation of solar cells, and calls for saving electricity and water for all employees, the company wants to show its concern for the environment by using energy more wisely, thus creating sustainability not only from the environmental aspect but also from business activities. indicating economic sustainability. Efforts to reduce emissions are also a form of AKR's compliance and alignment with the Indonesian government, which has a target of reducing emissions by 2030 by 29% with its own efforts, and 41% with international assistance. 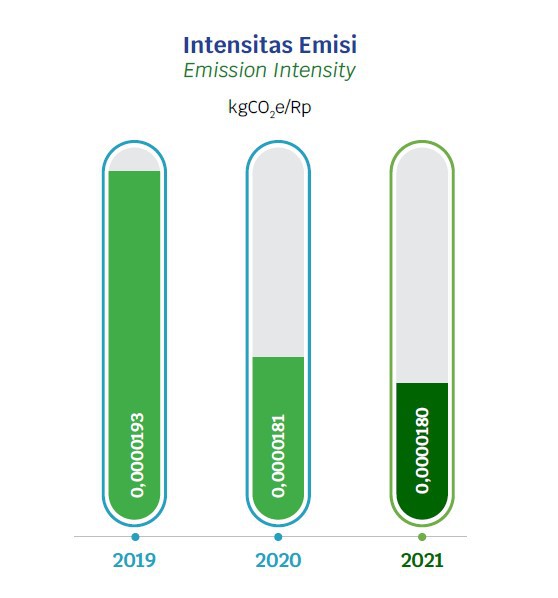 AKR Corporindo has 6 Zeros as the goal of the company's SHE. 6 Zero consists of Zero Fatality, Zero Potential Fatality, Zero Spillage, Zero Cross Over, Zero Loss Time Injury and Zero Product Quality Problem. The Company is supported by a digital system in achieving the six zero target (reducing scope 1), so that it can monitors the movement of products and the transportation fleet it operates. With the use of an IT monitoring system, the Company is proven can optimize the number of trucks used and reduce operational costs, make it more efficient. Truck fleet capacity was 10% more efficient, with internal fleet utilization increased by 13%, with mileage increased by 18%. And with compliance with standard driving parameters in the system, the mileage per liter increases by 5-6%. The Company is also improving the performance of safety operations by reducing the accident rate; the total recordable frequency rate per 1,000,000 KM can be reduced by 38%, and the total reportable frequency rate is reduced by 18%. In order to reduce air emissions, tanker trucks transporting fuel oil and basic chemicals also routinely do emission test. The fuel used in the Company's transportation fleet must also comply with standards, both Euro 4 and International Maritime Organization (MARPOL) standards. Therefore, the Company only operates trucks that pass the emission test.

The Company also does innovation in reducing scope 2 emissions, among others are:

The intensity of energy use in 2021, which reached 188.72 joules/Rp profit, decreased by 9% from the baseline in 2019 which was recorded at 208.46 Joule/Rp profit. However, there was a slight increase of 1% in 2021 compared to 2020 due to the adaptation of new normal activities and operational improvements.